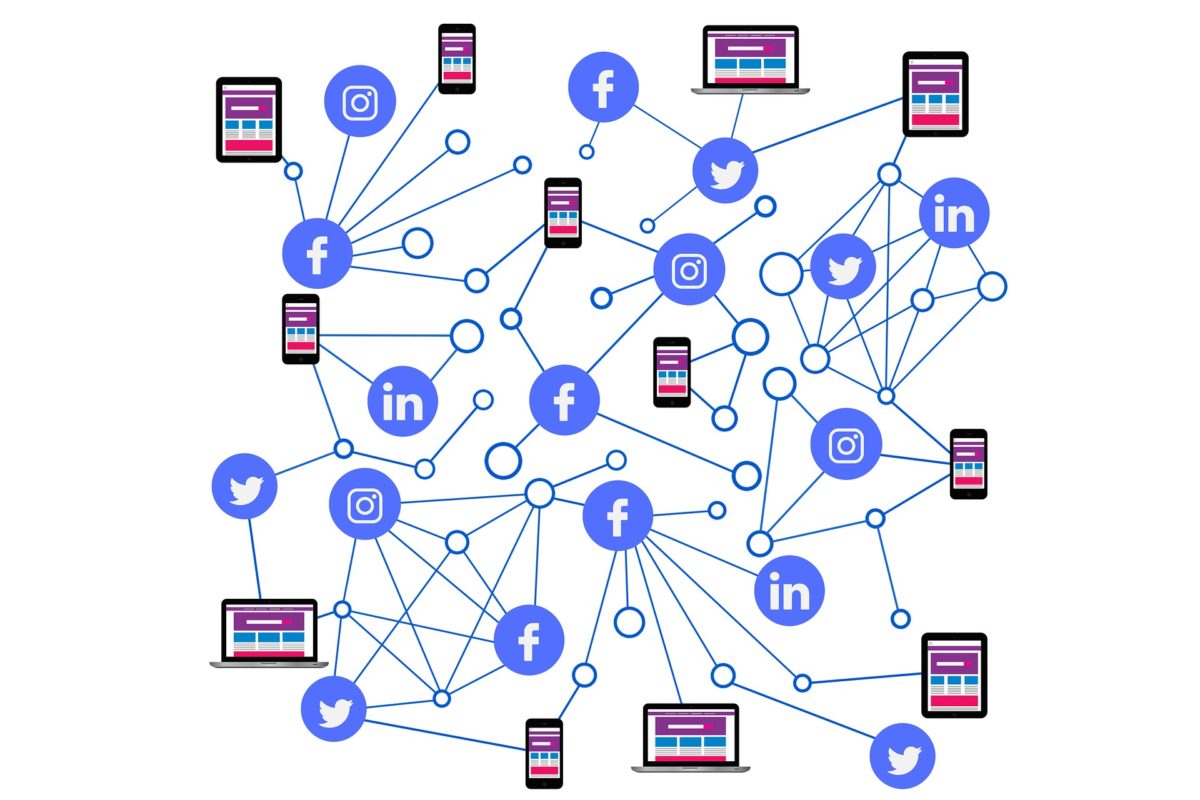 Your ad campaign has been a roaring success! Not only have your ads led to 32 click-through conversions, they also resulted in 89 views that led to a conversion as well. You can’t believe your luck! It almost sounds too good to be true.

Dumfounded you realize the cold, hard truth: you have no idea what’s going on.

What’s up with Facebook’s attribution model? How does it work –and why do they consistently report conversions that are, well –higher than they should be?

It’s this mystery that I’m going to attempt to unravel today. 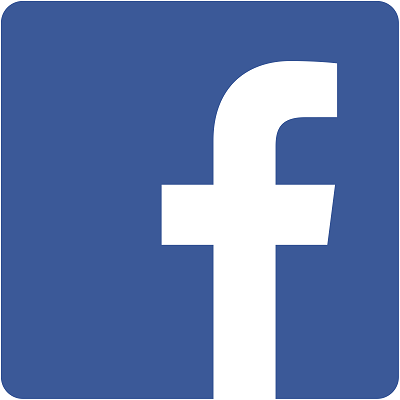 What is it, and how does it all work anyway?

Whenever you’re running an ad campaign on Facebook, you’ll also gain access to Facebook’s proprietary analytics program, which will track the success of your ad campaigns, and give you an idea about how they’re performing.

This is where attribution comes in. Once a conversion takes place, analytics will attribute that completed action to the right campaign or ad group.

This is fine, except that there’s a tremendous amount of wiggle room here in terms of determining what, exactly, was responsible for the conversion. After all, someone may have seen a Facebook ad, and then made a purchase a few hours later –but during that timeframe this person could have had multiple exposures to different ads –not just on Facebook, so how can you know exactly which ad was responsible for the conversion?

You can’t, as it turns out. But you can make an educated guess.

Of course, as you may have realized by now –there’s a good chance that Facebook’s attribution model is inherently biased. Essentially, we’re trusting Facebook to tell us how well Facebook’s ads are doing. Yeah.

Naturally, Facebook’s attribution model tends to be a bit generous in terms of attributing conversions to their ads. In fact, media specialist Tara West claims that she’s seen discrepancies between Facebook clicks and Google Analytics that are as high as 80% in industries where the audience has high mobile usage. “In other instances,” she writes, “the discrepancy has been around 50%.”

That’s a significant discrepancy! And it’s something that I’ve noticed myself as well.

What’s going on? In their zeal to claim conversions, is Facebook taking things to an extreme?

It appears that it’s not just one issue that’s to blame. It turns out, these discrepancies, more likely than not are the result of a few different factors.

Before we attempt to unravel this, though, let’s first take a look at Facebook’s attribution model.

Facebook’s Attribution Model: How Does It Work?

Let’s start by seeing how attributions are given.

First, let’s look at Google Analytics. They use a last-click attribution model to assign credit for conversions. This means that the last place someone comes from before they convert is the one that’s given credit.

Facebook, on the other hand, has adopted what Tim Halloran, Head of Social Advertising at ZATO calls the “Facebook-only model.”

Facebook’s default windows for conversions are:

Looking exclusively at Facebook’s analytics will inherently exclude all of the other channels, since it doesn’t take them into consideration.

“This makes sense, since they never claimed to be a universal analytics provider,” Halloran writes about Facebook, “but then, the inevitable conclusion we come to is, we can’t trust Facebook can we? They can’t tell us how many touch points that consumer went through before the first link click on our ad that resulted in a click-through conversion.”

View-throughs, particularly, can be notoriously problematic to accurately track. For instance, you don’t know if someone who happens to cast a momentary glance at an ad, and then later purchases the product in question, can really be attributed to the Facebook ad.

To show you what I mean, here’s a look at the results of a recent experiment that I conducted. To test out Facebook’s attribution system, I ran an ad to a random site under our ad account. As you can see in the following image, we had 31 orders attributed to that ad –even though it wasn’t directed to our site!

This indicates that people may have their Facebook account open and need only to see an ad for Facebook to take credit for the sale. This is particularly true if you create a Custom Conversion in your Facebook ad manger, which doesn’t rely on the use of a pixel embedded into your website’s code, and instead is created using URL rules. 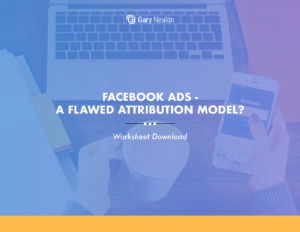 Get our Facebook Ads A Flawed Attribution Model Worksheet delivered right to your inbox.

Now, a look at what may be responsible for those inconsistent analytics reports.

While there are many reports of Facebook conversion numbers being inconsistent with other analytics programs, in some cases this is the result of Facebook’s attribution system, and in others, it may come down to a misunderstanding when interpreting the data.

Digital marketing consultant Jon Loomer has created a helpful list of issues that often arise with Facebook’s analytics. Let’s take a look at them now:

Another issue could be that your pixel isn’t loading quickly enough. This could be an issue of hosting, poor coding on your site, or it could simply be that there’s not enough on the page to hold the visitors’ interest, and they’re clicking away before the pixel has a chance to fire.

You can also get a hold of Google’s Pixel Helper Chrome plugin, to check to see if there are any issues with your pixel.

Another issue, according to Loomer, is inflated numbers due to the pixel loading too often. This is an issue that could be due to your conversion parameters. So, for instance, say you have customers redirect to a members area page after a purchase. Then suppose you create a Custom Conversion that tells Facebook that when someone visits the members area page, a conversion has taken place. Facebook will report a conversion each time that page loads. Even though this is a page that users will visit repeatedly, not only after a purchase. Or perhaps you place important order information on the thank-you page, so the customer bookmarks the page and revisits it. Again, if you’ve defined a conversion as the page loading, Facebook will report it as such –no matter if it’s one customer visiting the page multiple times.

Another issue could be that Facebook may be tracking all conversions –something that it does by default.

The good news, though, is that you can adjust your reports to view each individual conversion type.

Head over to your Ad Reports, then click Customize Columns. 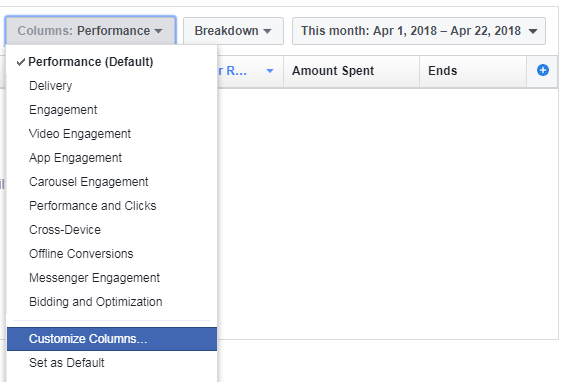 Next, select the ‘Websites’ option on the left. Then see which Custom Conversions you’ve created. 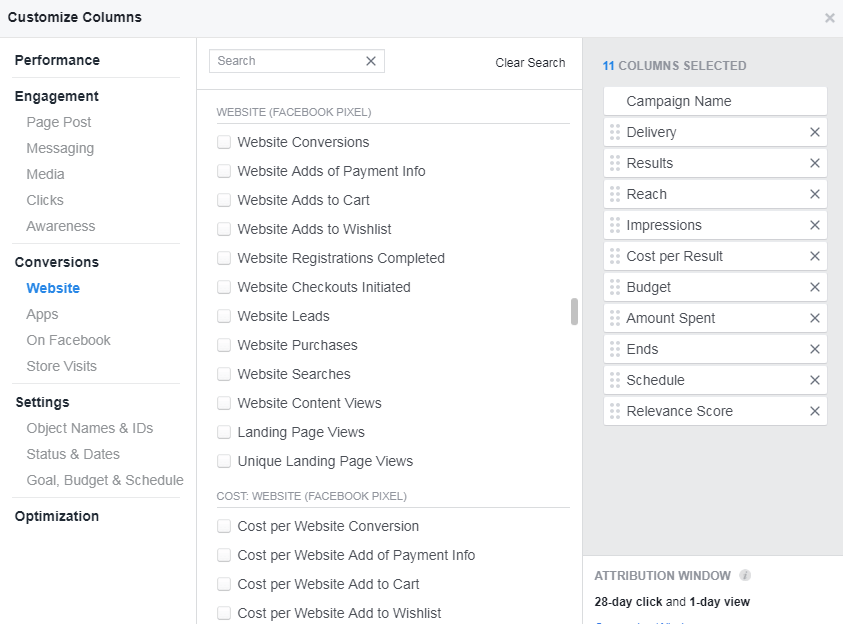 Select the conversion type that you wish to see, and Facebook will create an individual column for each conversion, giving you a better idea of what’s happening with your campaigns.

By default, Facebook reports conversions that take place within 28 days for click-throughs and 1-day for view-throughs. This means that someone could click on your ad and visit the page, but then leave and come back days or even weeks later to make a purchase, and Facebook would claim the conversion was a result of their ad. Or someone could simply have an ad appear on their Facebook page –they may barely notice it, but then would later go to your site and make a purchase. Again, Facebook would claim that the ad was responsible, while Google Analytics would not.

Even Toby Roessingh, a quantitative researcher in Facebook’s Marketing Science division and manager of the attribution partner program, acknowledged that a long window can sometimes allow for coincidences to take place.

“The longer the window, the more room you allow for coincidence,” Roessingh says. “But the fact is we have millions of advertisers buying ads on Facebook and it’s hard to make a blanket statement about what length of window is appropriate across the whole landscape. This is why advertisers should work to understand how their customers respond to their advertising and assess their approach to attribution against experiments.”

The good news is that Facebook’s default attribution windows can be changed.

Head over to Customize Columns again.

Then, in the corner of the page, you’ll notice the Attribution Window. 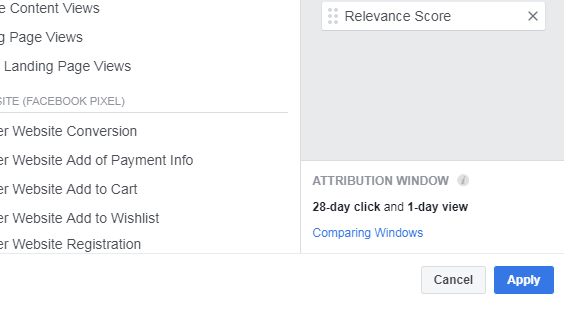 Click “Comparing Windows,” and it’ll take you to a page where you can choose your own parameters. 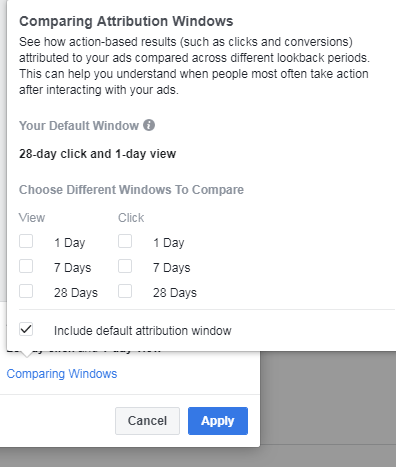 Risks of Advertising on Multiple Platforms: Who Gets Credit?

As you scale your business and begin to advertise on multiple platforms, conversion tracking can be increasingly difficult to accurately measure as well.

Particularly when it comes to view-throughs.

Say you’re running an ad campaign on Twitter, and one on Facebook, and LinkedIn. If someone is shown an ad on each of these platforms, and then visits your website, each platform will then claim credit for the conversion, when of course, it’s impossible to know which one was responsible. View-throughs are something that becomes increasingly more difficult to correctly attribute when you’re running ad campaigns on multiple platforms.

If you find that your conversion data is consistently skewed in terms of view-throughs, it may be an idea to remove the 1-day view-through conversions from your ad campaign’s settings altogether.

Tips for Getting Accurate Conversion Data

First things first, it’s important to recognize that Facebook’s analytics program isn’t a fool-proof standalone system, and it cannot be used on its own to accurately gauge the success of your campaigns.

Instead, make sure you’re using Google Analytics –or Kissmetrics, or your analytics platform of choice, to report on your campaign’s performance. You can then compare that data against Facebook’s.

Just be sure to tag your sponsored content with URL tracking parameters so that you can track your individual Facebook campaign’s performance accurately in Google Analytics. Google’s UTM parameters allow you to tag links with values for Source, Campaign, Medium, and more –making it easy to track the results of your campaign.

Next, and something that Tim Halloran and other marketers recommend, is adopting a last-click attribution model on all of your ad channels; the same attribution model that Google Analytics uses. This means that while view-throughs and click-throughs are viewed as assists, they don’t count as the ultimate source of conversions. Doing this will keep you from having to wonder which channel was the one that led to the closed conversion, instead, it’ll be far more clear.

Taking a proactive approach will allow you to more accurately gauge the success of your ad campaigns, giving you the data that you need to make decisions in terms of future campaigns, and how you spend your ad dollars.

What discrepancies have you noticed in your analytics data?

Get our Facebook Ads A Flawed Attribution Model Worksheet delivered right to your inbox.