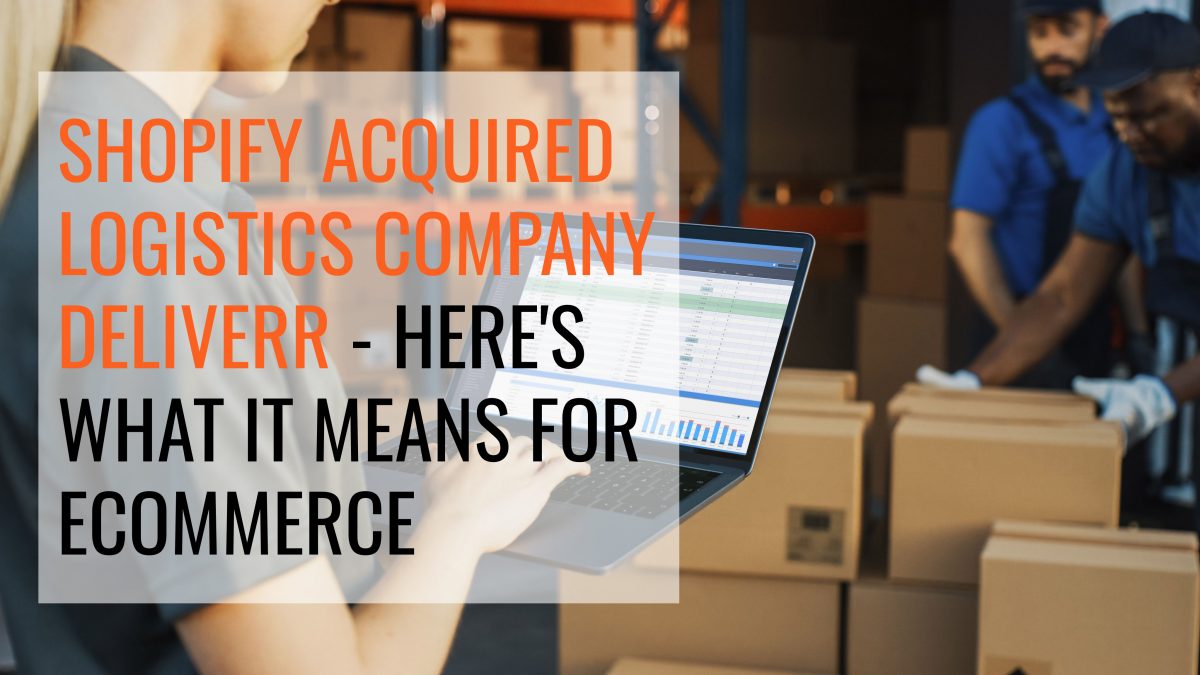 Delivery speed is a big differentiator for an online store. Expensive shipping fees or packages that take long to arrive could turn away many shoppers who are used to the fast, affordable (most of the time, free) shipping standards that Amazon has set.

On May 5, Shopify announced its $2.1 billion acquisition of Deliverr, a San Francisco-based fulfillment technology startup. This move is the largest acquisition in Shopify’s history, and could allow the company to take its logistics and fulfillment capabilities to a whole new level. The partnership’s goal is to simplify and democratize the supply chain and fulfillment processes for merchants of all sizes, whether they’re on Shopify or not.

Thanks to Shopify, launching an ecommerce business with your own brand and identity has never been easier. Over the last two years, the number of Shopify stores has grown by 201.53%. The ecommerce infrastructure giant now hosts over a million merchants in 175 countries. However, one area that Shopify has been struggling with is providing its merchants with a way to do fast, affordable shipping. This issue has hurt Shopify’s profitability, as they revealed this year’s first-quarter earnings that missed the mark.

What does Shopify’s Deliverr acquisition mean for online store owners? And will Deliverr be the correct piece of the puzzle that will supercharge Shopify’s service for its merchants?

Shopify and Deliverr: What You Should Know

Let’s take a look at what exactly Deliverr is, and how this acquisition will change things for Shopify.

Deliverr is a privately-held company that offers fulfillment solutions for ecommerce businesses. Founded in 2017, Deliverr has a proven track record as a fulfillment and logistics service provider over the last five years.

This relatively new company fulfills over a million monthly orders. Deliverr has existing integrations with direct sales channels and marketplaces like:

How Does Deliverr Ship So Fast?

Over the last two years, global supply chain bottlenecks have been a big problem for online business owners. Higher shipping costs and longer carrier times are stressing out merchants and disappointing online shoppers. Deliverr managed to power through these logistics disruptions with its combination of advanced technology and an “asset-light” business model.

They don’t own warehouses and don’t employ warehouse staff. Instead, they contract warehouses and use the manpower and equipment of these warehouses. They’re heavily invested in their software, technology, and good relationships with warehouses, which allows them to continue giving ecommerce merchants affordable, next-day delivery promises despite supply chain issues.

Deliverr uses a predictive analysis technology that spots product demand trends and customer preferences based on demographics and geography, allowing them to offer “ultra-fast fulfillment for fast-growing merchants”. Their software takes note of what sells well in a particular area and they make sure to stock more of those items on the warehouse shelves.

Deliverr can also ship products quickly because they rent warehouse space all across the United States. They have warehouses in over 80 locations in the US, including Texas, Ohio, Missouri, California, and New Jersey. They have two cross-docks, five sorting centers, and work with twelve carriers.

In their promotional video, they promise a “Prime-like” experience for online shoppers. They can fulfill customer orders in a fast and reliable way, for a fraction of the cost. They’ve been called “Walmart’s secret weapon” in 2020, helping the retail giant fulfill the influx of orders during holidays like Black Friday and Christmas.

Deliverr’s top-notch technology and services certainly didn’t go unnoticed by investors. In 2018, it raised $170 million in its series D financing. In 2019, Deliverr bagged a $250 million Series E funding, placing its valuation at $2 billion.

International sales are a key area of expansion for ecommerce businesses. Currently, Deliverr supports shipping to over 220 countries, including military addresses, Canada, and Mexico. Ecommerce store owners who use Deliverr services are eligible for programs like Walmart 2-day shipping and eBay delivery guarantees. For an online business that already uses Deliverr’s service, this means greater online visibility, improved conversion rates, and more sales.

On their site, Deliverr says that, as of the moment, they only support brand-neutral packaging. That means no custom branded packaging or inserts, but this enables them to deliver your packages much faster. However, this could change with the Shopify acquisition, so stay tuned to both of their websites for updates.

Why Did Shopify Acquire Deliverr?

A survey by Genius AI indicates that the majority of newly-opened Shopify stores are smaller, independent businesses that aren’t equipped to compete with large-scale or Amazon businesses. Customer satisfaction is very important for these merchants, and fast shipping and reliable last-mile partners are key components of this. With Deliverr, Shopify will be able to provide the businesses on their platform with a competitive edge against bigger players.

“Our goal is to not only level the playing field for independent businesses but tilt it in their favor – turning their size and agility into a superpower. Together with Deliverr, Shopify Fulfillment Network will give millions of growing businesses access to a simple, powerful logistics platform that will allow them to make their customers happy over and over again” Shopify CEO Tobi Lütke stated.

Shopify already has an existing fulfillment network powered by 6 River Systems, a company they acquired in 2019. The addition of Deliverr and their network of order fulfillment technology, software developers, and fulfillment specialists will form a broader, more powerful logistics unit for Shopify. This will also provide Shopify with better visibility and control over its supply chain.

Shopify Chief Financial Officer Amy Shapero mentioned that this acquisition will help Shopify “Accelerate its roadmap by assembling an end-to-end logistics platform that manages inventory from port to porch and across all sales channels.”

According to Shopify President Harley Finkelstein, Deliverr is a great choice for Shopify because Deliverr is software-centered and “asset-light,” which is in line with Shopify’s own approach. “We want to get our merchants highly reliable, fast affordable delivery and we think we can do that much faster with Deliverr,” he said.

How Are Shopify’s Competitors Reacting?

The acquisition of Deliverr heightens speculation about Shopify’s competition with Amazon. Currently, Amazon dominates the U.S. online retail market with a market share of 40%. Shopify has a market share of 10%. The two have totally different approaches and business models, and online merchants should select the platform that aligns with their products and end goals.

Amazon merchants have access to millions of Prime members who each spend on average almost $2000 annually. However, many Amazon merchants also regret giving Amazon control over their customer relationships and data. They’re also at the mercy of Amazon’s fee structures and policy changes that can often be one-sided. Shopify has come out as an alternative for online businesses that want to sell direct to customers through their own websites while having full access to their customer relationships and data.

On the heels of the Deliverr and Shopify integration, Amazon also announced the release of a new service called “Buy with Prime.” It allows Amazon merchants to embed and use Amazon Prime checkout on their own direct-to-consumer website, letting shoppers use their Prime memberships to avail of fast shipping and return guarantees.

Initially, it will be an invitation-only service for FBA merchants, but Amazon plans to extend the same benefits to those who don’t sell on their platform. This will give more entrepreneurs access to Amazon’s vast logistics network. Some have dubbed this move as a “Shopify-killer,” but Shopify promises a few key advantages for merchants.

In their blog post, Shopify says that businesses will maintain “Full ownership of their brand, business intelligence, and customer data”. Shopify also won’t have limits on the inventory merchants can store in its warehouse. Earlier this year, Amazon made changes to its FBA fee structures and policies that reward fast-moving inventory and shorter storage times, while penalizing excess inventory with more fees.

What Does This Mean for Shopify Stores and Other Ecommerce Shops?

Businesses that are already on Shopify will be excited to hear that the Deliverr-Shopify integration should provide them with top-quality, end-to-end logistics to improve the customer experience and boost sales.

Is the Deliverr Acquisition a Good or Bad Thing for Shopify?

Deliverr’s $2.1 billion price tag may seem huge, but it is an investment that could boost Shopify’s operational capabilities and earnings. In Q1 of 2022, Shopify clocked in revenue of $1.2 billion. It’s 22% higher than their Q1 2021 earnings, but missed their target revenue of $1.25 billion. This means a net loss of $1.5 billion for Shopify, contributing to its dropped stock price and leading to an overall decline of 70% for 2022.

But the year isn’t over and with the acquisition of Deliverr, Shopify’s strategy is to ramp up its fulfillment efforts to regain profitability and revenue. With a volatile supply chain that’s subject to frequent dips and glitches, online businesses have to find a way to ensure stable, efficient fulfillment, and fast delivery.

FAQs on the Deliverr Shopify Integration

Where is Deliverr located?

Deliverr is based in San Francisco, California, United States.

How long has Deliverr been in business?

Deliverr has been in business for five years. It was founded in 2017.

Does Deliverr own any warehouse?

Deliverr doesn’t own warehouses or delivery vehicles. It contracts and leases warehouse operators and uses the warehouse’s fulfillment departments to pick, pack, and ship ecommerce orders.

The Next Steps: Preparing for the Deliverr-Shopify Integration

Is the Deliverr and Shopify integration something you might benefit from in your own business? Here are the next steps you should take:

Step One: Watch Out For News and Updates on Shopify and Deliverr Websites

The acquisition is very recent and still awaiting regulatory review for the transaction to close. Shopify and Deliverr have released press statements and blog posts; however, full details of their new services haven’t been announced yet. Regularly check Shopify and Deliverr’s websites to stay tuned for the latest updates.

While waiting for their full list of services, revisit your current warehousing and order fulfillment operations to see where you can improve. Whether you’re currently working with a 3PL provider or self-fulfilling, check how you’re doing against your industry’s standards and compared to your competition. Are you able to deliver your customer orders on time? Are your customers happy with the delivery speed? Do you get complaints about damaged packages or other issues?

Warehouse and logistics may not be the most exciting part of running an online business, but Shopify’s acquisition of Deliverr is a sign of how crucial order fulfillment is for ecommerce merchants. Fast, reliable shipping is an important component of the customer experience. It also has a direct impact on your bottom line, so make sure to make the right choices when it comes to your fulfillment partners.

Looking to implement some strategies that’ll help your ecommerce company to scale? Reach out today for your free 20-minute consultation, and let’s find some tactics you can use to start scaling your business, today.

Get our Shopify Acquired Logistics Company Deliverr - Here's What It Means for Ecommerce - Worksheet delivered right to your inbox.